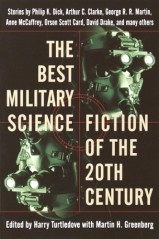 This review originally appeared in the October 2001 issue (#158) of The New York Review of Science Fiction.

The need to wage war is a trait that nearly every human culture shares. As the ultimate extension of politics, acts of warfare wholly or partially define many of the turning points in human history. Writers throughout the ages, building upon and sometimes even borrowing from our oldest recorded myths, such as Beowulf, Gilgamesh, and The Iliad, prominently display this aspect of society. Of course, writers of military fiction pursue various agendas with widely differing results. Some celebrate war and the warrior-king, finding noble truths and actions on the battlefield, while others, at the other end of the spectrum, pointedly portray the horrors of war and the acts of individual depravity that occur during warfare. Yet, throughout that spectrum there is a constant: You learn about the human condition when you study individuals at war.

END_OF_DOCUMENT_TOKEN_TO_BE_REPLACED

This review originally appeared in the June 2003 issue (#178) of The New York Review of Science Fiction.

The discovery of nuclear fission ranks as one of the greatest innovations of the twentieth century. It ended World War II, ushered in the Cold War, brought a new form of power and fueled our worst nightmares with the Three Mile Island and Chernobyl disasters. It also conveniently brought about the metaphor of the nuclear family, and as the twentieth century progressed, the metaphor became as combustible as the real thing. I know from experience: my nuclear family underwent fission when I was just four years old. With divorce rates in the United States hovering around 50% for a number of years now, this phenomenon shows no sign of abating soon. This unavoidable fact of modern life also provides a basis for David Gerrold’s two most recent novels, Jumping off the Planet and Bouncing off the Moon.

END_OF_DOCUMENT_TOKEN_TO_BE_REPLACED 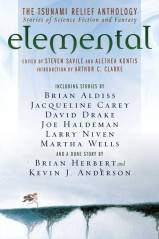 This review originally appeared in the July 2007 issue (#227) of The New York Review of Science Fiction.

In general, the populace of the United States has a memory problem. Events that should remain in the public consciousness for long periods of time disconcertingly get buried quickly under the latest round of’celebrity news and gossip. However, this wasn’t entirely true in the case of the tsunami that wrecked havoc upon Southeast Asia on December 26,2004. Unfortunately, a rare instance of the country actually paying attention to a significant foreign event for more than a few days ended abruptly when hurricane Katrina wrecked massive damage upon New Orleans and significant stretches of the Gulf Coast. However, like the heads of many other Asian relief efforts, Steven Savile and Alethea Kontis persevered and continued editing an anthology of original stories, of which all the proceeds (including the authors’ fees and royalties) will go to the Save the Children Foundation. The final product, Elemental, appeared on store shelves this past summer.

END_OF_DOCUMENT_TOKEN_TO_BE_REPLACED

The Strange Adventures of Rangergirl by Tim Pratt

This review originally appeared in the January 2007 issue (#221) of The New York Review of Science Fiction.

Where I come from we don’t have castles, cairns, holy wells, or standing stones. Seeing them for the first time, they looked completely different from how I’d imagined them. I realized then that this is why so much of the best fantasy comes from the British Isles, and why so much American fantasy is so bad. Their writers grow up with ring forts literally in their back yards sometimes, while ours grow up reading their books.

— Michael Swanwick, “The View from the Top of the Mountain“ 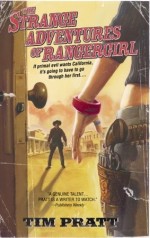 Although the text is from his Guest of Honor speech at Finncon 2003, this is a sentiment I had heard Swanwick express at various book readings and signings previous to that convention. He also added that this, in part, served as an inspiration for Iron Dragon’s Daughter and helps to explain why its tone differs greatly from a large number of fantasy novels. Although that type of detritus is missing from much of America’s countryside and we lack an ancient mythology that ties a plethora of gods to our land, America does possess a different type of ruins and a much younger mythology—ones differing from the industrial modes Swanwick relied upon—that writers can tap into for uniquely American fantasy. With legends surrounding real-life figures, as well as ghost towns and abandoned mines scattering the countryside in its wake, the wild west of the 1800s provides another vein for American fantasy to mine, which Tim Pratt taps into in his debut novel, The Strange Adventures of Rangergirl.

END_OF_DOCUMENT_TOKEN_TO_BE_REPLACED

This review originally appeared in the December 2000 issue (#148) of The New York Review of Science Fiction.

1632 is a novel whose popularity initially seems to defy explanation. If you go to Amazon.com, and pull up this book, you’ll immediately notice that the average customer review is four-and-a-half stars out of five. However, not knowing if this sort of thing was normal on Amazon, I checked out a few other time travel/alternate history books, which I thought were far superior, to see how they compared. Michael Swanwick’s Jack Faust: 3.5 stars; Harry Turtledove’s Guns of the South: 4.5 stars; Ward Moore’s Bring the Jubilee: 4.5 stars; Mark Twain’s A Connecticut Yankee in King Arthur’s Court: 3.5 stars; L. Sprague de Camp’s Lest Darkness Fall: 4.5 stars.

END_OF_DOCUMENT_TOKEN_TO_BE_REPLACED

The Holy Land by Robert Zubrin

This review was originally published in the July, 2004 issue (#191) of The New York Review of Science Fiction.

Under normal circumstances, I am a huge fan of satire and of taking absurd situations to their logical extreme. In my opinion, one can find comedy in almost any situation. Almost any situation. Given the complexities of Middle East politics, the present American stance in confronting terrorism, and the tragedies that have taken place, I find very little potential for humor in the events that precipitated and followed the September 11 attacks. However, that doesn’t preclude the possibility that someone else can find the humor and point it out to me. That’s where Robert Zubrin steps in with his sophomore fictional effort (as founder of the Mars Society, he has published extensively on behalf of space exploration), The Holy Land, in which he attempts to satirically skewer the last 55 years of Middle East history rearranging the major players and events.

END_OF_DOCUMENT_TOKEN_TO_BE_REPLACED

This review originally appeared in the August 2000 issue (#144) of The New York Review of Science Fiction.

“For intelligence and clarity, Jack McDevitt is the natural heir to Isaac Asimov.” After reading a few of McDevitt’s novels, it’s not hard to see why this quote from Michael Swanwick has appeared on the cover of a couple of McDevitt’s other works. With an incredibly clear and unobtrusive (almost to the point of simplistic) style, McDevitt seems to want to relate his story to the reader as transparently as possible, as if he doesn’t want you to notice the writing at all, just the story itself. But the similarity between McDevitt and Asimov is much more than stylistic. Like Asimov, McDevitt’s strength lies in the story itself, with the characterization taking a back seat to the plot and subplots. This is not to say that McDevitt cannot give us quality characters. Rather, it is the events and their unfolding that draws our attention. As a result, novels such as Engines of God, Ancient Shores, and Eternity Road end up as incredible page turners that completely absorb you until the last page.

END_OF_DOCUMENT_TOKEN_TO_BE_REPLACED

Cities in Flight by James Blish 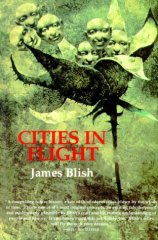 This review originally appeared in the October 2000 issue (#146) of The New York Review of Science Fiction.

Because most of the genre’s classics were written well before my adolescence, I often bemoan the fact that many are out of print, making it hard for me to track them down and read them for myself. Luckily, however, the task is not impossible. Often, with a little perseverance, I can find these novels used, and occasionally they come back into print, making my search easier. When I do find them, I sometimes find myself with contradictory reactions to them. For example, after reading Slan by A. E. van Vogt, I understood intellectually its importance to the genre and its popularity when it first arrived, but I couldn’t fathom how someone reading the novel today for the first time could think it a great example of sf. In fact, I found much of the writing so outright laughable that I was left wondering why it was necessary to bring the novel back into print.

END_OF_DOCUMENT_TOKEN_TO_BE_REPLACED

This review originally appeared in the July 1999 issue (#131) of The New York Review of Science Fiction.

Over the past decade or so, Carroll & Graf became a leader of sf reprints by bringing many classics of sf back into print, even if only for a brief period. This army of reprints includes, but is not limited to, Kingsley Amis’s The Alteration, at least three J. G. Ballard books, Ian Watson’s The Embedding, Clifford Simak’s Ring Around the Sun, and Murray Leinster’s The Forgotten Planet. As part of their marketing strategy, Carroll & Graf made extensive use of David Pringle’s Science Fiction: 100 Best Novels for their back cover blurbs; if a reprint made it into his list, then Carroll & Graf made it clear by placing the line “Selected by David Pringle as one of the best 100 novels of all time” on the back cover. Sometimes, the novel itself didn’t even have to make the list; if another of the author’s novels made the list then Carroll & Graf would excerpt a Pringle quote that praised the author in general. It should then come as little surprise that Carroll & Graf is reprinting David Pringle’s 100 Best, originally published in 1985, but out of print for many years.

END_OF_DOCUMENT_TOKEN_TO_BE_REPLACED

An edited version of this review originally appeared in the April 2006 issue (#212) of The New York Review of Science Fiction.

The urge for authors to write a novel in response to Robert A. Heinlein’s Starship Troopers is completely understandable. In addition to the genre’s well-established internal dialog, Heinlein’s statue and influence in the field, combined with his didactic and inflammatory statements concerning citizenship and the responsibilities of those who serve in the armed forces, almost demand a response from each new generation of sf writers. What’s really amazing is that it inspired John Scalzi to compose Old Man’s War, a novel that in some ways is very similar to Joe Haldeman’s The Forever War, even though Scalzi never read Haldeman’s classic. Don’t let the structural similarities fool you though; Heinlein inspired Scalzi to write something different from Haldeman’s take on the material nearly 30 years ago.

END_OF_DOCUMENT_TOKEN_TO_BE_REPLACED

Some Fantastic 2.0
Blog at WordPress.com.