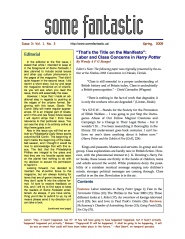 “Labor relations in Harry Potter,” by Wendy
A F G Stengel; “‘No Fate or Human Misconception?’: Fate in the Terminator Films,” by Alex Esten; “The Phillies in 2083: A Look Ahead at the Phillies Bicentennial Season,” by Bill Conlin; “’Back to the Future…Yet Again! Three More Times’: Three Views of the ‘Three Laws,’” by Richard Fuller; “The Romano Fafard vs. the Enterprise or How Québec Beat Star Trek,” by Caroline-Isabelle Caron; & “Men Are from Earth, Women Are from Celestis: Issues of Sex & Attraction in Paul Park’s Celestis,” by Matthew Appleton.

Click here or on image of front page to download/view issue.